By Script PipelineJanuary 28, 2022No Comments 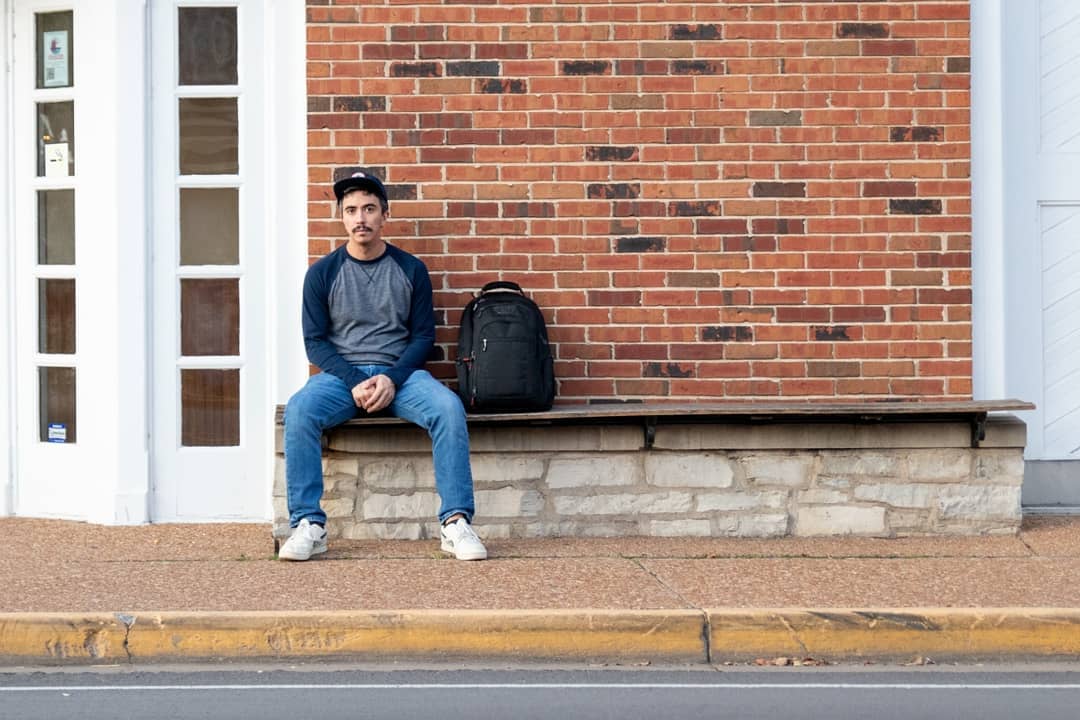 Winner of the 2021 First Look Project (Drama), Andy’s script Bellyache struck a nerve with its utterly flawless depiction of a dysfunctional mother/daughter dynamic, in the vein of Lady Bird and other dramedies resonating on a truly universal level.

First and foremost: is Bellyache coming from a personal pace, in terms of the concept and its characters? Why choose this foundation, and really the framework itself, for a story about the fractured relationship between a parent and her child?

Yeah, it’s pretty personal, but in a few different ways. The plot is about an alcoholic lunch lady who is fired from her job at a low-income elementary school when she’s caught giving a less-fortunate child free meals. My mom (not an alcoholic) was a cafeteria worker at a low-income school in Missouri where she was put in this situation by a school policy that states when a child’s lunch account goes negative $25, that student is no longer allowed to receive hot meals and is instead given a cold cheese sandwich. There are similar policies in public schools across the nation. My mom had to enforce this policy herself, and as a mother of three, it destroyed her every time. I remember her telling me about it when she still worked there, and it deeply affected me just hearing her talk about it. It seemed to go against a very human instinct, which is to care for/feed children in need. That’s the plot part of it. The relationship story within is definitely laced with my own feelings from growing up with an alcoholic father, becoming estranged from him for 18 years, and becoming an alcoholic myself, then getting sober at 29. Lots of fiction mixed with little bits of my truth. Once I started writing, I kind of organically found the irony in this flawed mother being the one trying to create a better life for the children in her town, with the help of her estranged daughter, whom she had hurt and neglected for much of her life, and the inevitable, painful healing that would have to take place between them before they could create meaningful change.

Where do you feel the gap lord in the market right now in terms of storytelling? Who or what are we not hearing enough about, and why do you think that is?

Well, I’m all-for getting diverse stories out there from storytellers of all backgrounds. There’s nothing I love more than hearing an interesting new voice share their unique truth. To speak for myself, something I’ve talked a lot about with my mentors and now management team is my voice and how it speaks up for the Midwestern working-class. It’s who I am. I’ve burned my hands cleaning fryers in fast food, driven forklifts in dim, dusty warehouses, pushed shopping carts, one at a time, through a foot of snow. When the pandemic started, I was in my ninth year of waiting tables at a Golden Corral. On the darker side of that, I’ve had multiple close friends die from opioid overdoses that run rampant throughout the Midwest, hung around friends whose parents were hooked on drugs, watched my single mom struggle, month to month, to make ends meet. The working-class is what I know, and they’re almost always at the heart of the stories I tell. As for why we’re not hearing enough about them—I don’t know. Superheroes are overqualified for the jobs out here.

So you live in Missouri … (no no, I’m going somewhere with this). How detached—or attached—do you feel to “Hollywood?” And as a fixture in the ever-growing Screenwriting Twitter world, in what ways has that helped gain knowledge, or a sense of community? In short: when one isn’t able to network in-person at Los Angeles events or mixers, what do you do to bypass that hurdle? Even if the hurdle, nowadays, is almost imaginary? *if it can even be considered imaginary … this is a loaded question, I’m sorry.

Honestly, it’s not as bad as one might think if you’re as online as I am (saying this with deep shame, btw). The internet, and the pandemic to some extent, have made me feel quite connected to the industry. From March 2020 on, many of us were in the same boat whether you lived in LA or not. I’ve had lots of Zoom calls, met new writer friends from around the world, taken generals from my bedroom—those things made me feel like I was in Hollywood in a sense. As for Twitter, it’s been the single most game-changing thing for my screenwriting career. Hands down. If it wasn’t for Twitter, I wouldn’t have gotten my meeting with Epicenter. But more than that, I’ve gained invaluable insight into the craft and business of the film industry simply by following those further along than me. The community is booming right now. I’ve made so many genuine new friendships from Twitter. It ain’t perfect, but our community is certainly special and I love being a small part of it.

I do agree the hurdle is kind of imaginary right now. But to bypass the kind of imaginary hurdle from outside Los Angeles, I took to contests in a big way. Find the reputable ones like Script Pipeline. Just do a little research. Check out previous winners of contests and Google what they’re up to now. For me, I grinded away in silence, placing in contests here and there. Then eventually, I got lucky and placed in the Nicholl Fellowship, and things just kind of took off from there as I used those placements to build momentum. Now, I’m repped by a management company that I love, and I’ve still never stepped foot in California. Not even Nevada. Not even the state to the right of Nevada. Okay, I’ve barely left Missouri. I am the most Midwestern person to ever live.

Follow-up to that—you recently signed with Epicenter. When you first started screenwriting, did you buy into the myth you absolutely had to be living in LA to find reps? How did you end up with Epicenter?

Yeah, I did buy into that myth, for sure. I didn’t think you could do anything from Missouri. The further I’ve gotten into this stuff, the more I’ve realized it just depends on what you want to do. If you want to be a staff writer on an LA-based TV show, in non-pandemic times, then yes. You must be in LA. But for feature writers, which I mainly identify as, you can be anywhere in the world. I’ve heard many reps list countries around the world in which they currently rep a “Hollywood” screenwriter. At the end of the day, you just need to write well. That’s literally all they care about.

Oh boy, I wasn’t going to bring this up in a Script Pipeline interview as it involves A COMPETITOR, but since you asked, let’s do it. So, over the summer of 2021, I placed with a pair of features in the Nicholl Fellowship. Got some buzz from that. Then, Dorian Connelley of Roadmap Writers reached out to me over DMs and told me she enjoyed my tweets, and wanted to read my Nicholl scripts. I passed them along, and she passed them along to Joey Tuccio. He liked them and wanted to send them out on my behalf. One place they landed was Epicenter. They wanted to meet me! I had been taking some generals at that time due to the Nicholl buzz, but there was something different about the Epicenter meeting. I met with Jarrod Murray and the coordinator of the company, Hayley. The vibe was very chill, and they seemed to really enjoy my voice. I recall them specifically stating they enjoyed my Midwestern, working-class roots and felt there was a lack of representation in Hollywood for those types of stories. They also mentioned that they didn’t want to change me at all, which was nice to hear on my end. I ended up taking two more meetings after that with other reps, but it was clear to me that I was supposed to go with Epicenter. Just a gut feeling, and I’m glad I chose them. So far, it’s been a real pleasure getting to know and work with everyone there.

I’ve discovered in the past few weeks, as I delved deeper and deeper into your feed, that you’re one of my favorite Twitter accounts. It takes a lot of skill for someone to pull off comedy in Twitter form. I … don’t have a question here, this is just a compliment.

Wow. Thank you so much. That is the nicest thing anyone has ever said to me.

For the writer who’s like, “I have a script, I’m not on social media, I know little about the industry, I live in the Midwest, and I know nothing about managers and agents …”—where would you recommend they start? What worked for you?

First, I would say, “OOF.” But then I would try to give valuable information. So I mentioned it earlier, but contests are where I started. Being isolated out here, it was basically the only way I felt there was even a remote chance of being discovered. And honestly, in my case, I was right. The Nicholl placements changed my life. I would also say, get on social media if you’re at all willing to try. It can be such a great tool, and again, if I hadn’t been on Twitter, maybe I place in the Nicholl in silence, Dorian never DMs me, and I never get a meeting with Epicenter. As David L. Williams said the other week on my podcast (The Social Screenwriters Podcast, shameless plug), “You gotta shoot all your shots.” That’s a huge part of chasing this dream. If there’s a shot to be taken, no matter how small, take it. Get your work in front of people. Give back by reading peer scripts and saying some nice things on Twitter. Embrace the community. We truly are all in this together and I’ve found so much joy in just embracing the community.

The best movie released in 2011. No thinking about it. Gut reaction.

Okay, I had to Google 2011 releases. BUT! I want to go with one I don’t hear many people talk about—Take Shelter, written and directed by Jeff Nichols. It’s great, but I especially love the “There is a storm coming,” monologue by Michael Shannon. That part rules.