By Script PipelineSeptember 11, 2017No Comments 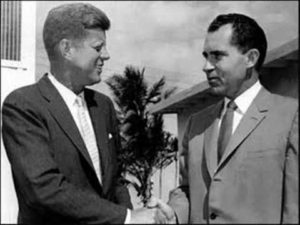 Hyde Park Entertainment has picked up Lee Batchler and Janet Scott Batchler’s drama spec Jack and Dick. The story will follow John F. Kennedy and Richard Nixon’s careers as friends and political rivals leading up to their presidential debate. Ashok Amritraj and Alan Gasmer are set to produce. Meanwhile, Warner Bros. is moving forward with Josh L. Gordon’s untitled sci-fi/thriller. Set in a near-future world where advances in artificial intelligence are threatening the human race, Gordon’s spec follows a young engineer who finds herself involved in a billionaire’s plan to alter the fate of humanity. Next up: Tyler MacIntyre and Chris Hill’s horror/thriller spec Nightlight has found a home at Columbia Pictures. Nightlight follows a 10-year-old boy who fends off invaders when he’s left home alone. Tyler MacIntyre is set to direct as well. Finally, Screen Gems and Royal Viking Entertainment are teaming for Peter A. Dowling’s Exposure. His action/thriller spec centers on an African American rookie cop who has to fend for her life after she captures corrupt officers murdering a drug dealer on her body cam.

– Writers Chris McKenna and Erik Sommers are set to return for the Spider-Man: Homecoming sequel.

– Glenn Ficarra and John Requa are set to write the Harley Quinn and Joker spinoff for DC and Warner Bros. The writing team may also produce and direct.

– Todd Phillips and Scott Silver are set to write an unrelated Joker origin story. Phillips to possibly direct, Martin Scorsese to possibly produce, and Leonardo DiCaprio to possibly star (at least according to rumors).

– Lionsgate has picked up David Burke’s female-led adaptation of The Picture of Dorian Gray. Annie Clark (aka St. Vincent) will direct.

– And the female-led adaptation of License to Drive is moving forward at Twentieth Century Fox. The script will be written by Alisha Brophy and Scott Miles.

– And finally, Scott McGehee and David Siegel will write and direct that female-led adaptation of Lord of the Flies you’ve probably heard about on Twitter.  This one’s at Warner Bros.