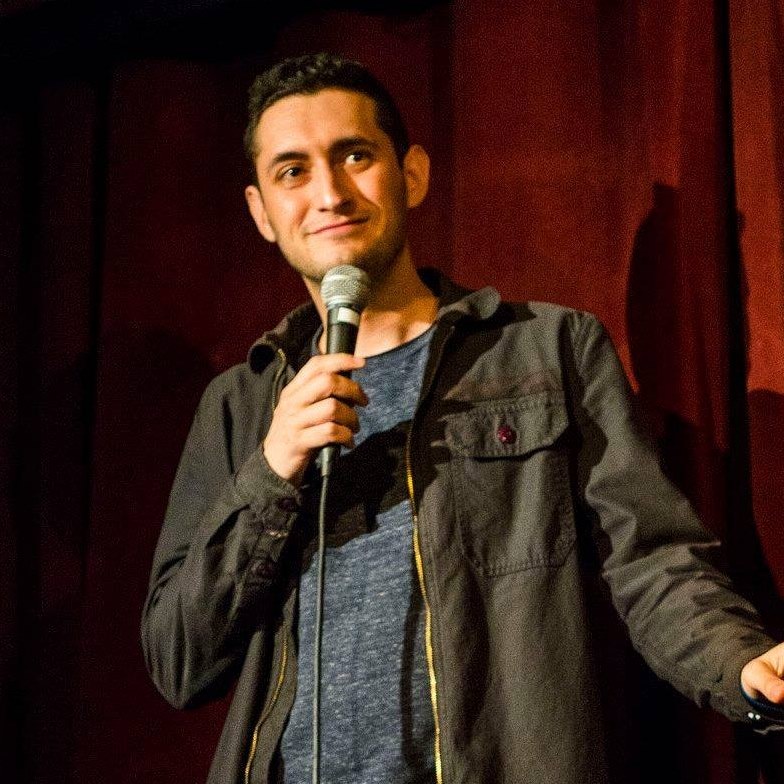 Winner of Script Pipeline’s 11th Great TV Show Idea Competition with the animated comedy pitch Pro Losers, Dan is a multifaceted talent–a writer, director, and stand-up comic. Script Pipeline reviewed the pilot script based on the Pro Losers concept and gave it a Recommend, later circulating the material to industry partners. Dan’s pilot episode for his award-winning series Flatbush Misdemeanors also received high marks, with Script Pipeline execs calling it “a low-key comedy carving its own road within the genre. . . a sort of dry, eccentric hybrid of High Maintenance, Atlanta, and Louie.”

As a writer and comic, how did you first get involved in the entertainment industry? Was it writing first, then stand-up comedy? In either case, how have both of them fueled or shaped the other?

Since I was a kid, I wanted to do stand-up. Just took a while to work up the courage. I was more comfortable writing early on, because you didn’t have to be in front of people, but stand-up’s always been the goal. I started writing sketches in college, then post-college. It was just a way to work a different muscle and put out jokes that didn’t work in a stand-up context. I’d been doing stand-up for a couple years when I had an idea for a narrative show, That’s My Bus!, and just started writing it on spec, then worked on it with a friend, before a network took interest. Stand-up’s my favorite thing—that’s what I do every night. I love writing and making projects, too, so hopefully they can continue to complement each other at higher levels. It’s fun as you gain confidence to sorta cut the bullshit and get to what you actually want to talk about and want to spend time figuring out how to talk about—in both stand-up and in writing. You also get funnier, sharper, more present. . . they’re very different skill-sets, but each one helps the other, just keeping your mind active and creating.

You’re a Script Pipeline contest winner, so we’re obviously fans of your writing and soon became fans of Flatbush Misdemeanors, the series you co-wrote, co-directed, and co-produced. The challenges in content creation—whether it’s a short film, a pilot episode, or a feature—are clear. Budget and time being perhaps the most important. What did you learn from creating Flatbush? What were the “niche” hurdles that up-and-coming writer/directors might not realize? How do you best prepare?

Having no budget is obviously a huge hurdle, but it sorta forced us to be more creative. A lot of the elements that have become some of our favorite features of Flatbush—the chapter divides, the subtitles—came from us having to scrap other ideas that would’ve required a budget. Working with people you trust is so important. Kevin Iso (my collaborator, co-everything, on Flatbush) and I are both stand-ups. Every adult we cast is a stand-up, friends we know and love and have a sense of their voices, which helps with the writing. Stand-ups know who they are, so if you make them comfortable, they’ll make the end product better. Kareem Green, Aparna Nancherla, Drew Dowdey, Yamaneika Saunders, Kerry Coddett, Jeffrey Joseph, and more. They all did that. People we trust helped make the vibe on-set more comfortable as well, which just ups everyone’s performance.

There are going to be a million challenges, especially when you’re doing an independent thing on no budget. People’s schedules changing, location issues, all that. We write, direct, star, and produce it—it all leaves you spread very thin, handling the logistics in particular. The more help with that producing aspect, the more present you can be pre and during filming. Otherwise, you’ll realize on the way home an alt line that would’ve made the scene better, but you don’t have money or time for reshoots, so that’s it, onto the next. Heavily scripting the scene, running it with the actors as much as time allows before shooting, letting the lines settle into the actors’ voices so it feels natural, and making the vibe for the crew and cast comfortable on set. It’s all good experience. The more stuff I make, the more confident I feel in the process, because you’ve been through it before. Yeah, I’m just excited for that to continue.

The pilot you sold to Fox, That’s My Bus!, didn’t make it to series, however it must have represented a big step forward in your career. Did hitting a wall with a network (which, let’s be honest, is entirely common given the nature of television) change your approach at all with regards to the type of stories you write and develop? Or did this reaffirm that you were indeed on the right path?

It just gave me more motivation and direction. It meant a lot to get it to that pilot stage. That was the first pilot I’d ever written. To have FOX buy it—when no one knows who I am—was unexpected and cool, then to get to co-executive produce it as well. If/when I’m fortunate to be in a spot like that again, I’ll have gone through all of the steps before, so I’ll keep getting better at that side of it. The whole experience made me a better writer, creator, collaborator, and the fact that it didn’t go to series helped continue to motivate me in stand-up.

The only “change approach” sorta thing was co-creating/releasing Flatbush after that. When you work on a pilot for a network, you clear all these hurdles and work through all of these steps, and then, if it doesn’t go, no one gets to see the thing. It doesn’t exist. Putting out Flatbush, there was some feeling of, even if only 20 people see it, that’s something. We’re putting something out there and people can react to it and interact with it. It’s something that’ll exist. We’ve been fortunate to get some attention with Flatbush, awards and stuff [the first episode of Flatbush Misdemeanors became Oscar-qualified after winning the Grand Jury Award for Best Narrative Short at the Florida Film Festival]. The goal for this project is to make it a narrative half-hour for television, so we’ll see.

When coming up with new ideas and developing a series (or film), how much consideration do you give to the current marketplace? Do you pay attention to what’s selling, what’s thriving, what’s not getting picked up, and alter your course to suit the environment? Is it crucial for a writer to stick with the trends or try and, more or less, create a new trend?

The trends seem to change quickly and no one really knows what they want until everyone else wants it. If I altered course every time there was a new hit everyone was telling me to watch and tried to write a watered-down version of that, I don’t think I’d enjoy that process or grow much in terms of finding and honing my own voice.

I’d feel pretentious as hell if I said what writers should or shouldn’t do. All I can really speak to is my (limited) experience. I make the stuff I find interesting, that I’d want to see, stuff that I hope is funny and distinct and has its own feel. I like hitting different notes and pushing myself, both in stand-up and in writing/creating stuff. There’s so much I want to do and a lot of ’em will feel different, but hopefully it’ll all mesh together over my career. That’s the hope. And that I can build an audience of people who are into what I’m doing, as a stand-up who makes things. I don’t know. I have a lot more specific thoughts on this. . . if you’re reading this, nice reader, feel free to reach out if you’d like to talk about it more, otherwise we can just leave it here with me speaking vaguely on Script Pipeline’s site.

From your perspective—living in NYC, which, like Los Angeles, is one of the most competitive cities for creativity and talent—how does one make themselves seen and heard? No doubt you’ve seen uber-artistic people fall by the wayside. What’s the common denominator in the ones who succeed? How important is it to attract champions for your work and use that as both motivation and another stepping stone forward?

I’m not sure there is much of a common denominator. Sometimes it feels like complete anarchy out here. I just keep doing stand-up and making things and pushing myself to go further and not get complacent. Yeah, like you said, there are so many crazy funny, talented people who fall off. Talent feels kinda meaningless. It’s just relentlessness and some internal drive that can put you in a better position, maybe. And ideally you can find some enjoyment in the process from internal growth rather than external validation only. That’s easier said than done, but I give it a shot. Feeling that I can articulate an idea in stand-up better than I could have a year ago, fleshing out a premise on-stage or in a script, getting a better reaction for something that actually feels relevant to you—that’s all fuel.

I set goals, short and long-term, internal and external. That might be a cliche answer. If someone else said that to me when I was first starting, I’d probably think they were blowing me off, but that’s really all there is to do. Finding people who really believe in what you’re doing is rare and hugely beneficial, and I’m grateful whenever I’ve found that.

Oftentimes it can feel like no one’s listening. If you find people who listen and hear what you’re saying and seem to get you, don’t take that for granted.

Dan is a stand-up comedian and writer from New York City, performing stand-up every night at some of the top clubs and alternative rooms in the city, headlining Caroline’s on Broadway in 2018. Dan created and wrote an animated series, That’s My Bus!, which received a pilot order from FOX after winning 1st place at the Montreal Just For Laughs Festival. Dan has appeared on TruTV, MTV2, and as a cast member on MTV’s Vidiots. As a writer-filmmaker, he has had four projects featured in the New York Television Festival, most recently the award-winning comedy series Flatbush Misdemeanors in which he co-stars and co-writes/directs. On radio, Dan was a writer for SiriusXM’s Bennington and Comedy Contributor for Neil deGrasse Tyson’s StarTalk Radio. Dan wrote for the 2017 WGA Awards, hosted by Lewis Black, and the 2018 WGA Awards, hosted by Amber Ruffin. As a stand-up, Dan’s festival credits include New York Comedy Festival, SF Sketchfest, Boston Comedy Festival, Limestone Comedy Fest, and Finger Lakes Comedy Competition (2015, 1st place).

View the first episode of Flatbush Misdemeanors on Vimeo.