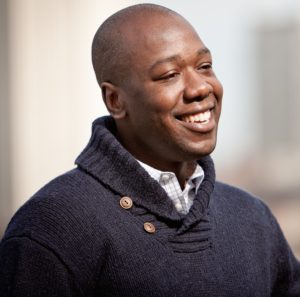 Howard Jordan Jr. placed as runner-up in the Script Pipeline TV Writing Competition with the comedy pilot Family Be Like. He later was accepted to the CBS Writers Diversity Program and locked down agency and management representation. In 2017, we was brought on the staff of the CBS sitcom Superior Donuts. His first solo-written episode aired in February 2018.

It’s been two short years, and you went from runner-up in the Script Pipeline TV Writing Competition to staff writer on a CBS comedy. What pieces had to fall into place to get there? What was the process like?

I’m not sure if this is a good thing, along the lines of hopeful or inspirational, or a sad thing, a little more disappointing to hear. But all the clichés are true. Keep writing. Keep networking. Keep improving.

There is no singular route to a room, or a sell. What continues to prove effective for me is making time to write and being receptive to notes. If you do that, you’ll get better. If you get better, your odds of taking a leap forward will also.

Certainly, participating in the 2016-2017 CBS Writers Diversity Program was a critical piece in your career puzzle. How much did it change your perceptions and knowledge of the industry?

When I moved to LA in the summer of 2013, I knew I wanted to transition from my career in advertising as a creative director. But I didn’t know how. Worse than that, I didn’t know anyone. Oh, and did I mention, I also didn’t have any material, yet?

Through family connections and friends of friends, I began to meet working television writers at various levels. The one suggestion that continued to pop up; “Apply to the diversity programs.” But that is rarified air. Eight spots per program and applicant fields ranging between 1,300 to 2,500.

That pursuit is where my education really began. So, I have to mention it. It’s not as simple as 1-2-3. I used a further-developed version of the script named runner-up at Script Pipeline with a brand new Brooklyn Nine-Nine spec to get into the CBS program.

The program reinforced things I already knew from a long career as a creative professional. But the true discovery came in the importance of telling personal stories in conversation and on the page that only you can tell. It educated us about what the industry is looking for, what is expected of a staff writer, and it made it clear that “I can do this.”

The experience on Superior Donuts: what has met your expectations, and what hasn’t? We’re sure there was some degree of hesitation early on, but did you get comfortable with this new environment right away, or did it take some easing into? What’s been the biggest hurdle?

My expectations were surpassed the moment I got the opportunity to step inside the room. The best thing about being a staff writer is that the success of the show has almost nothing to do with you. You are there to learn and contribute to the direction of the showrunner. It’s that simple.

As far as comfort, you have to feel out the room. In sports terms, play your position. I’m still finding my footing after 30 weeks. It takes time. But I happen to be in a very welcoming, encouraging space with seasoned, proven pros. The only hurdle is learning to be on for 10 hours a day with the same people at the same table, for 9 ½ straight months. I wasn’t ready for such a never-ending dinner party.

No secret that writers are flocking to TV. We started reviewing TV material in 2008, and it’s incredible to see the number of pilots now compared to then. What are key points a writer should keep in mind when developing an original pilot? Do they really have as much creative flexibility as they think they have, or should they take a more rigid approach to what types of concepts they pursue?

I’m no development expert just yet. But I’d suggest making damn sure you love the premise and the characters, write it with purpose, and be ready to write it as many times as it takes to get it just right. Then, take notes and rewrite it. Then, scrap it and start over again, if needed.

I do believe the field is wide open. Write what you love. There are so many outlets looking for content. If you write something that can sell, someone will buy it. Or at least I hope that’s the case. I’m kind of depending on it.

In 2015, we asked where you saw yourself in 10 years—you said having three sitcoms on-air simultaneously. Has that changed? Have you been able to balance writing your own scripts with the demands of writing for the show?

It hasn’t changed one bit. That’s still my end game. Why not.

The commitment to the room comes first. It’s hard to do, for sure. It takes time management and a very patient spouse. But if you want it, there’s always time to push something forward or explore something new. You make it. You find it.