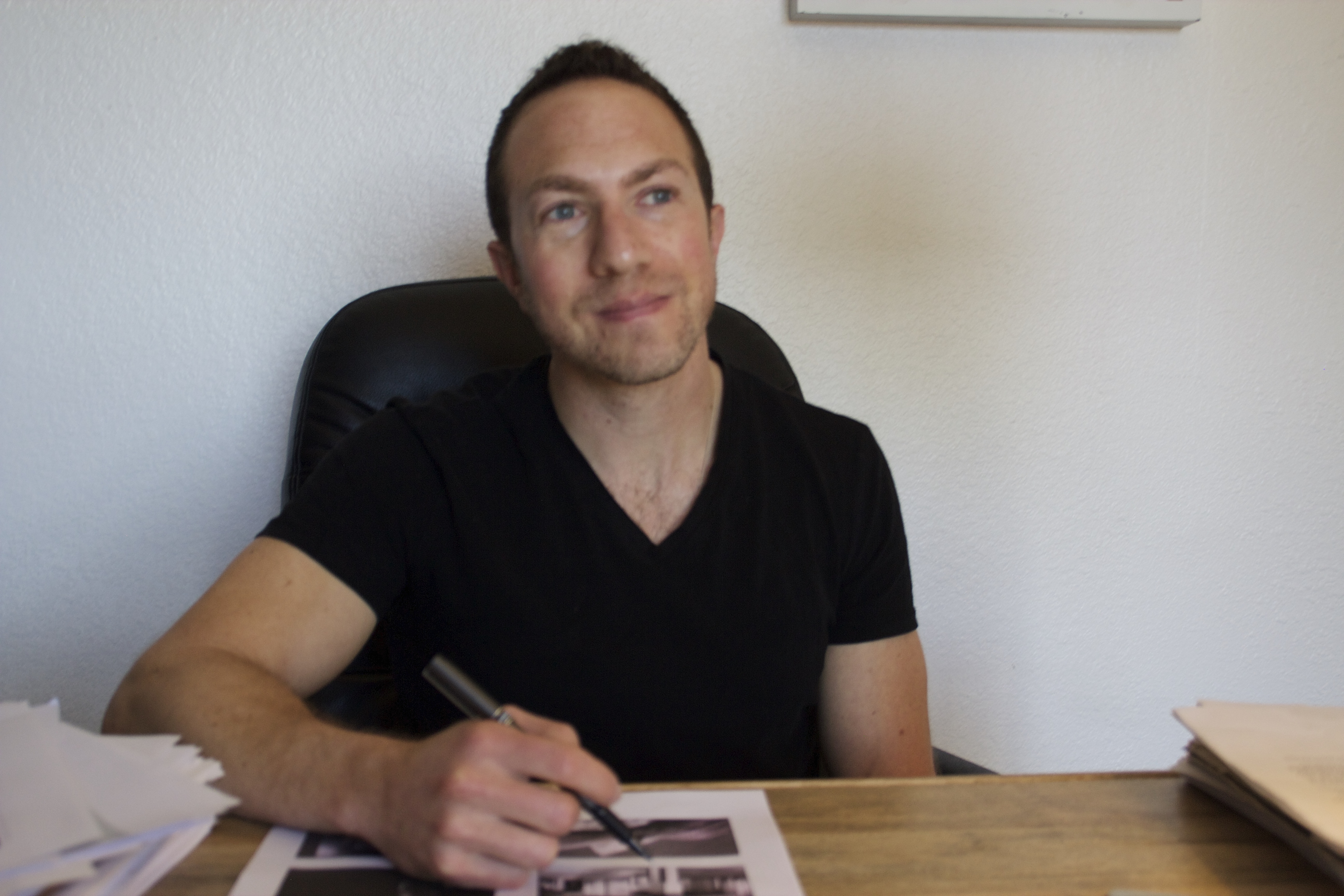 – Josh Chesler, writer of Chasing Ghosts starring Tim Meadows (SNL) and co-writer of Underground (Script Pipeline Screenwriting Competition finalist), currently in pre-production with LAConfab Entertainment. His latest projects include the surreal adventure screenplay David P. Boorman and the Quest for Good News and the TV series Extractors, co-written with Paul Connor. Chasing Ghosts will be available for digital download and on VOD and DVD April 21.

Have your career goals always leaned toward film and writing?

From as early as I can remember, I was interested in writing and telling stories. I started reading at a very young age and began voraciously devouring books as well as movies. In junior high, I wrote a lot of short stories just for fun–most of which are thankfully stored on obsolete media that can never be recovered.

Then in high school, I had the good fortune of being able to take some film classes, which really changed my life and opened my eyes to what movies can be capable of–watching Kubrick, Godard, Hitchcock, and Lynch films at 14 was eye-opening, to say the least. That led me to apply to USC film school, where I majored in Film Production and really began to focus on writing in a whole new way. I came out of school determined to write and direct the kinds of films I wanted to see.

The first script you wrote: what were some of the most crucial things you learned early on?

Well, that first script wasn’t unlike those first short stories–a great learning experience, and a chance to fail in private. I had an amazing writing teacher at USC who guided me through that first feature, and I learned a ton with regards to structure, tone, and style. But what I hadn’t learned yet was how to really connect to my work, and tell stories that mattered to me.

It wasn’t until my fourth script (which was actually an early version of what became Chasing Ghosts) that I started to feel confident in my writing process and truly able to stand behind my work. Coming out of film school, my friends and I were convinced we’d sell that first or second script and be working screenwriters within a year. But the truth is, you have to earn it, and you have to develop your craft to the point where you’re ready for that career.

From initial concept until it went into production, what was the evolution of Chasing Ghosts from your side of things? What pieces had to come together to get the film made?

Tim Meadows and Toby Nichols in the dramedy Chasing Ghosts.

It was quite a journey! In 2012, I sent the script, at that point titled The Autumn Children, to producer Molly Mayeux. She liked the script and saw a lot of potential in it, so we worked to develop it as a possible project for a production slate she and our Executive Producer Jay Walters were putting together. After a challenging but rewarding year of rewriting (and rewriting and rewriting), we finally landed on the script that became Chasing Ghosts. From there, the producers hired our fantastic director Joshua Shreve, who they had worked with on a previous project. His involvement really got the ball rolling, but of course his input led to even more rewrites, as he started putting his own stamp on the film.

We officially went into pre-production in March of 2013, and we were racing to get the film started while still casting for our pivotal lead roles. It was only when Tim Meadows signed on and we found the amazing young Toby Nichols for our lead role of Lucas that we knew we had a real movie on our hands. By May, we were shooting.

I also became an Executive Producer on the film, which has been an incredible gift and learning experience, as I got to be on set every day and work closely with the director and producer through every edit, sound mix, film festival, and distribution plan. Now, we can’t wait for people to finally see it!

You and your writing partner, Paul Connor, have placed as a finalist in the Script Pipeline Screenwriting Competition with a mystery/thriller (Underground) and the Great Movie Idea Contest with a romantic comedy. What genres do you gravitate toward?

As a writer, I always strive to challenge myself with each new project, whether that be a different genre, world, or storytelling style. That said, I find myself naturally being drawn to stories of characters who are trying to figure life out and who find themselves thrust into a situation that forces them to evolve, grow, and find new answers. I love filmmakers like Cameron Crowe, Richard Linklater, and David O. Russell who mix comedy and drama fluidly to tell stories of the human condition.

So in that sense, even if I’m writing (or co-writing) a thriller or action-heavy script, I’m always coming at it from that angle, and looking for the human connection inside of a story and concept. For example, Paul and I have a TV show we’ve created called Extractors, which is a large-scale action/drama, but at its core it’s a story about people who are given a second chance at life.

What are the biggest challenges (and blessings) when working with a writing partner?

It’s a great experience working with someone who shares your taste in film and sense of narrative, where you’re working together to find the best way to tell a story that you both believe in. Paul and I complement each other in different ways–I tend to think big picture while he is incredibly detail-oriented. We elevate each other’s ideas and push each other to be better. So in that sense, it’s a really great working relationship.

The challenge of writing with a partner, any partner, is that you are not the same person, and arguments and disputes will inevitably rise. Sometimes it’s over where to put a comma, and sometimes it’s over your entire third act. These “healthy debates” can actually serve your script and improve your story, but you do have to be prepared for that being a part of the process. The other challenge is just that you are subject to each other’s schedules, and it’s not always easy to be in the same room when you want to be, so you have to develop different ways of working together while trying to stay on the same page.

All that said, you’ve probably noticed that I also write on my own. Chasing Ghosts is an example of a film that is incredibly personal which I couldn’t imagine writing with any partner, however close we are. I just finished a new feature spec that is also quite personal and idiosyncratic, and it just felt like the type of movie I needed to write by myself. Certain genres and stories lend themselves better to collaboration than others, and Paul and I fully realize that we both have many stories to tell.

Now that you have a writing credit on a produced film, have other opportunities risen as a direct result?

Actually, it’s interesting because we haven’t shared the film with too many people yet, so it’s been kind of this big secret that we’ve had for the past year. Having the film released really changes the conversation: now it’s a movie that’s out there in the world, and it’s a real tangible thing as opposed to a file on someone’s computer. I’m looking forward to people’s reactions to the film and hope that it serves as a great writing sample for me on future work.

Outside of that, the script that Paul and I were Script Pipeline finalists on, Underground, now has a production company attached, and we’ll be co-directing the film. So we’ve been working closely with the producers on developing the script and moving into the early stages of pre-production. We’re hoping to get it up in front of the cameras by early next year.

Is there a single, best piece of advice for other writers looking to get their screenplays produced on an independent level? Or is there really no special formula?

The indie world is really thriving these days. There is so much you can do on a much smaller budget today, compared to when I got out of film school. Chasing Ghosts is a great example. We made the film for under a million, but we attracted top talent like Tim Meadows and Frances Conroy because they loved the script.

So while it’s a cliche, it’s actually true that it all comes down to the story you’re telling. If you write a great script that can be produced on a small scale, you have a real chance at getting that movie made and getting A-list actors interested, because actors are hungry for great roles that are few and far between in many of today’s movies.

I think my best piece of advice would be to try to find the types of producers who gravitate toward the kinds of stories you want to tell. There are many independent producers out there who are eager to nurture new voices and tell original stories, and it’s worth seeking them out. Organizations like the Sundance Institute (not just the festival) and Film Independent are great places to begin.

The other option, of course, is finding an economical way to just make your film yourself. It’s amazing how many films are now being funded by Kickstarter and Indiegogo, and people are making incredible films for a fraction of the budget you used to need. The key is to stay passionate about your own project and your story and have that come through on the page–and with every person you talk to about the project. As the writer, your greatest power is your own voice.