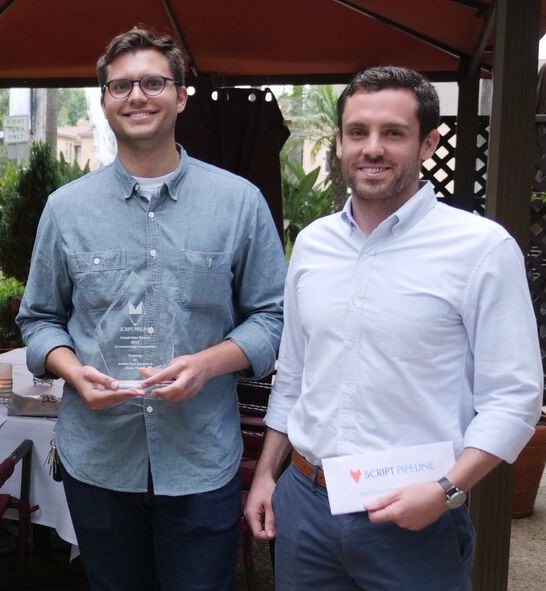 Co-writing relationships can be tricky. It’s always impressive when a script turns out so tonally consistent when there’s more than one writer involved. How do you iron out who plays what role? What’s sort of your general dynamic? It’s a safe assumption that your instincts and styles fall in line, but what are some of the challenges in writing a feature with a partner?

Jamie: I think we’re very lucky that we have similar, and perhaps similarly immature senses of humor. We’re often just trying to make each other laugh with each pass of the script. We can’t really have any ego or preciousness with our writing, because the only way this works is if we’re completely honest and brutal when things aren’t working. And I think often the biggest hurdle for us is staying confident that each new draft will be better than the last one. Writing can be a bit of rollercoaster, and the fact that there are two of us can be really helpful for keeping up our passion and momentum. One of us is always moving the ball forward.

Josh: But as far as delegation goes, we don’t have strict roles. Both of us eventually do everything. We always outline the entire story together—which can run upwards of 50 pages. Our outlining process is similar to doing “notecards.” This is the most collaborative part of our process. When that’s ready, one of us opens Final Draft and begins “draft zero.” We call it “draft zero” to remove any expectation of it being remotely good. After that is completed, we re-outline the entire story re-evaluating character arcs, plants/playoffs, and suspense. With that new outline, the other person does the real first draft. We repeat the process over and over until we have a “girlfriend draft”—the one we send out to get torn apart by our significant others.

In general, the challenges involved with any creative relationship necessitate being respectful of each other’s ideas and being able to navigate disagreements. You have to feel OK blurting out an idea even if you’re not completely comfortable with it. When diagnosing a problem we often say “we need a solution, the bad version of which is…” And so we can work through problems together without judgement.

Like co-writing partnerships, comedies, too, can be difficult to execute. But Getaway seems like it could easily hit a global audience, given the setup and attention to detail when it comes to establishing the characters. Comedies sometimes go awry when the humor doesn’t translate, or feels too specific. Was this ever a concern? What advice would you give writers who are attempting to write something similar in this vein, as far as tone and approach?

Josh: To be honest, we never had a conversation about Getaway as it related to global audiences. We just set out to write something that we wanted to see. Our aim was to ensure it was a quick read, had an unconventional tone, and contained themes we believed would make for an interesting debate. It’s been fascinating to see the differences in how men and women react to the story. Issues of masculinity and femininity was something we felt was in the zeitgeist. I’d say that’s the most culturally universal part of it.

Jamie: We’re big believers in writing what you know. That doesn’t necessarily mean writing your life story, because every script can’t be about some under-appreciated artist with writer’s block, but rather taking the fears, neuroses, settings, and characters that you’re familiar with and blending them in unique and surprising ways. We love really desperate characters because they let us laugh at the things we find most embarrassing about ourselves. Josh and I have written a number of comedies about deeply insecure men who desperately want a woman’s respect. I’ll let you come to your own conclusion about what that says about us.

Do you typically write together, or you have your own separate projects? Is it important for writers who team up on scripts to branch out and do their own material? It seems obvious writers can have it both ways, but we see examples where that’s not always the case—in other words, where the partnership itself is the brand. What’s your stance on that?

Josh: Writing partnerships are just like any other type of relationship. What works for one team might not work for another. What we know is our collaborative process and that it works for us. Whenever one of us has an idea, the other person is always the first to hear it. Though we occasionally have differences in terms of taste, interest, and personal experience, we have not yet encountered a need to branch out.

Jamie: We really just enjoy writing together, and I think we complement each other’s skills and shortcomings. We have similar aspirations to write and direct features where we have a large amount of creative control, and most importantly, I feel like we can be a lot more productive when we’re working together. We’re currently wrapping up our first draft on our next feature, and we have a number of feature and pilot scripts on the horizon that we’re really excited about.

What are your backgrounds when it comes to writing? How did each of you get started?

Jamie: I’ve been running around with a camera and screaming, “Quiet on the set!” to my family for pretty much my whole life. By high school, I was reading and writing feature scripts and shooting everything from short horror parodies to a feature adaptation of The Death of Ivan Ilych. Seriously. There is a full length movie on a hard drive in my parents’ attic that reimagines Tolstoy’s 19th century novella about a dying Russian bureaucrat with a bunch of teenagers in suburban New Jersey.

Josh: Similarly to Jamie, I knew I wanted to be a filmmaker at a very young age, but I was far from Hollywood. I was in the sleepy suburbs of Iowa, and I would stay up all night re-watching behind-the-scenes DVD extras of The Lord of the Rings. I didn’t have the money to make what I was seeing on TV and in theaters, but you know what—writing is free. So I teamed up with my friend, and we spent years writing these fantasy and zombie novels which have since become kindling for my fireplace. But because we spent so much time together writing, outlining, and discussing ideas, I learned that my strengths are in talking out ideas with a partner. So ever since I’ve been writing, I’ve been co-writing.

Jamie and I didn’t set out initially to be co-writers. We met at USC’s graduate directing program and would often discuss and critique each other’s projects. Those note sessions would start as a few hours, but eventually turned into days and even months. By that point, we realized we had accidentally become co-writers.

Regarding your contest-winning screenplay Getaway, one of the comments during judging: “shades of the Coen Brothers. . . a no-brainer for a fun, darkly comical genre hybrid.” Whether or not you’d agree with that particular assessment, you managed to pull off a true (and rare) page-turner. When it comes to this genre, what trends do you see emerging? It’s certainly subjective, but where are films getting it “right” and where are they getting it “wrong?”

Josh: Neither of us are stand up comedians or joke writers. We didn’t set out to write a comedy. We set out to write a thriller that made us laugh. It’s a bit of an odd goal, but we’re attracted to those kinds of movies. Audiences today are extremely cinema-literate. Because of that, we don’t tend to do straight-genre pieces. We’re always looking for ways to pull the rug out from under the audience. We call those “Oh shit!” moments. For us and our work, it’s important that the audience walk out of the theater not just entertained but also itching for a rich conversation.

Jamie: We’re fans of movies like In Bruges, Kiss Kiss Bang Bang, The Visit, and Get Out that are able to move deftly between really tense moments and scenes that are absolutely hysterical. Making a film that can do that and also be about something of substance is a tall order, but that’s always what we’re aiming for. The success of Get Out was really exciting to us because it means there’s an incredible appetite for that kind of smart, impactful genre film.