On Becoming a God in Central Florida – Pilot 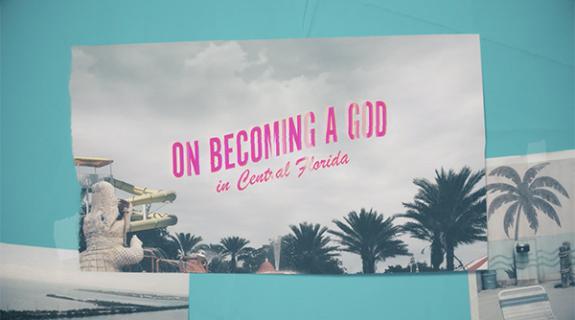 To be completely reductive, every story is about desire. A character wants something so much that they will do whatever it takes to achieve it, and the alternative is inconceivable to them. When writing dark comedy, things become more difficult: The main character’s goals tend to be less than noble, but the audience still needs to care about their journey. If the audience doesn’t empathize or sympathize with the characters, then what’s the point of watching?

Set in the early 1990s, On Becoming a God in Central Florida, created by Robert Funke and Matt Lutsky, walks that fine line. Krystal Stubbs wants stability. She grew up poor, and now that she and her husband have infant daughter, she wants to make sure there’s food on the table and a roof over their heads. As she tells her husband, “I won’t be poor again.”

About her husband: Travis wants more. He wants the American dream he was promised—cars, boats, helicopters. He is a “millionaire-in-waiting” and his way forward is through FAM, short for Founders American Merchandise. FAM is a multilevel marketing company (or, you know, a pyramid scheme) that sells inferior products in bulk, expecting the buyers to sell to other people (their “downlines”) who sell to their downlines who… you get the point. But FAM’s bigger draw is Obie Garbeau II. Obie is a millionaire who makes his living not only heading FAM but also selling inspirational self-help tapes for his devoted followers. Yup, he’s basically a cult leader though, instead of selling immortality or spirituality, his promise is the American dream. And Travis has bought into his message completely—he’s so enamored with that hope of something more that he’s willing to quit his J-O-B (Garbeau and his devotees will only spell that word out) to achieve it. Krystal sees the company for what it is—false hope—but she’s willing to support her man as long as he keeps his J-O-B.

So what does Travis do? Huge spoilers ahead: He quits his J-O-B anyway, and on his way home, he drives into the swamp and gets eaten by an alligator. Now dubbed the “Alligator widow,” Krystal is left with an unpaid second mortgage, creditors looking to repossess everything she owns, and dozens of boxes of FAM merchandise. Faced with eviction and poverty, Krystal decides to fully embrace the FAM lifestyle. She will recruit anyone she can to join the pyramid scheme and do whatever it takes to have her sense of normalcy and stability back. She knows it’s wrong and she knows that the company is built on false promises, but it’s her only option. Her goal isn’t morality; it’s survival.

Despite all that, the show is wickedly funny. The pilot script balances Krystal’s emotional journey with spot-on satire about capitalism, the American dream, and the cult of personality. The script itself is longer than the actual pilot episode, with many of its scenes showing up in later episodes. Krystal’s defining decision to embrace the FAM lifestyle doesn’t actually happen in the filmed pilot, but it makes sense for the screenplay. Good pilot scripts should specify what the main character’s journey will be and how they will go about achieving it, but that doesn’t always work for the finished product. Sometimes you just need more time with the characters to get there, and the extra time Funke and Lutsky spend with Krystal is time well spent.

Needless to say, you should check out this show. Kirsten Dunst flawlessly leads as Krystal (a future Emmy contender for sure), and the supporting cast of Théodore Pellerin, Mel Rodriguez, and Ted Levine also give amazing performances. (A mulletted Alexander Skarsgård shows up as Travis in the pilot with a performance that’s equal parts humor and pathos.) Overall, few shows today are this incisive and funny.