The Other Two – Pilot 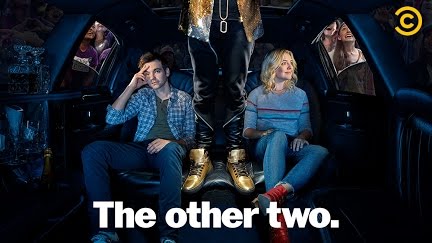 Perhaps the most important element for every television show is concept. Unlike movies, television shows need to convince audiences not only to watch the pilot but also to watch two or three or more seasons. This means combining a high-concept premise with compelling characters. Breaking Bad had that “wow” factor, as did stuff as diverse as Weeds, The Wire, and Killing Eve. But perhaps my favorite recent example is The Other Two.

Here’s the premise in a nutshell: Imagine a teenager who becomes famous overnight after his Youtube music video goes viral (not unlike Justin Bieber). The show isn’t about him; it’s about his two older siblings, who are well into their late twenties and are not even remotely successful. It’s about them—the “other two.”

Written by Chris Kelly and Sarah Schneider, the pilot’s teaser does an excellent job depicting that disparity. The show opens with 13-year-old sensation Chase Dubek (a.k.a. “ChaseDreams,” played by Case Walker) being interviewed on the Today Show. After talking briefly about his success, his mom Pat (hilarious-as-always Molly Shannon) mentions his two older siblings: actor Cary (Drew Tarver) and former dancer Brooke (Heléne Yorke). The script cuts away from Chase’s interview to show the sad reality behind Pat’s descriptions. Cary is a struggling actor who’s auditioning for the role “Man At Party Who Smells Fart” in a commercial, and Brooke works for a leasing agency and squats in the company’s unrented units.

Although Kelly and Schneider mine much of the humor from the inherent sadness of Cary’s and Brooke’s lives, they never feel pitiable. Instead, they’re two people who had lofty dreams and ambitions but whose lives never materialized in the way they had hoped. There’s definitely a great deal of empathy and sympathy for these characters, even if we’re laughing at them half the time.

Still, the show is hilarious, with a constant barrage of jokes and pop culture references that make it seem at times as the heir apparent to Difficult People, and for that alone it’s worth checking out. Come for the schadenfreude, stay for the spot-on satire of American culture.

Read The Other Two Pilot