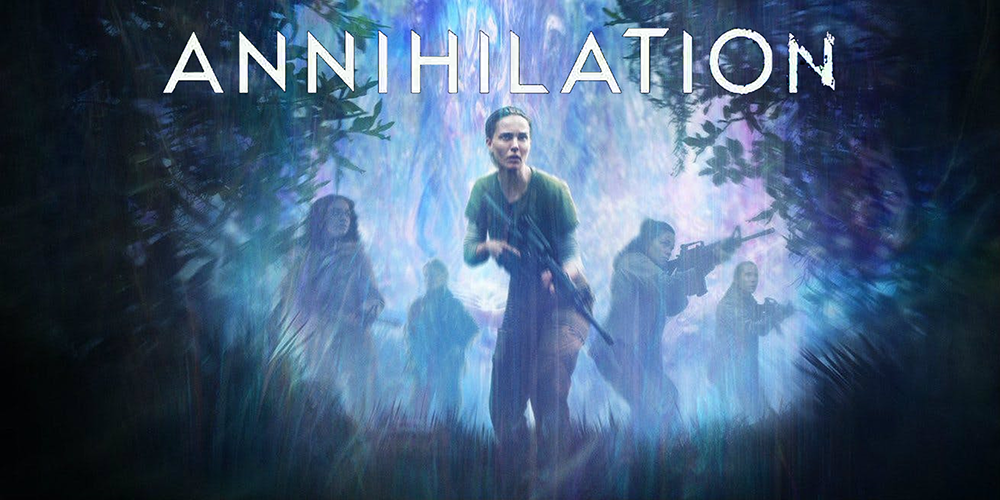 There’s always that one movie you meant to watch in theaters but just never got around to seeing. I knew I had to see Annihilation after watching the trailer, with its beautiful visuals, unique synthesized score, and amazing cast. But for whatever reason, I didn’t make it in time, and honestly, missing it was a huge mistake.

Written and directed by Alex Garland (whom we’ve talked about previously) and based on the novel by Jeff VanderMeer, the movie starts with a simple premise: There’s a mysterious and expanding sci-fi anomaly called The Shimmer in the southern United States, and every team the government has sent in has disappeared, except for one man, who mysteriously shows up a year after his trip inside. His wife Lena (Natalie Portman), a cellular biologist and military veteran, volunteers to go into The Shimmer with a team led by psychologist Dr. Ventress (Jennifer Jason Leigh). From there, the team ventures into a world where evolution has run amok—with cross-species (such as an alligator-shark hybrid) that should never exist somehow thriving—and the film adopts a tone reminiscent almost of a fever dream, disorienting the audience and the characters. The team discovers that The Shimmer is acting as a prism with everything, particularly the DNA of the flora and fauna (and also the fungi!), reflecting and refracting back upon itself into mutations, both beautiful and disturbing. And soon, the characters realize they’re mutating too.

Perhaps the film’s greatest success is that it takes its simple horror/sci-fi premise and builds everything from it, most notably the setting. Every weird creature and plant serves as a constant reminder that the main characters are changing and there’s nothing they can do about it—simply existing in this world is as effective at generating scares and tension as any monster on screen. And about those monsters: In perhaps one of the scariest/freakiest movie scenes in recent memory, a bear-like creature screams with a human voice as it stalks the characters. It’s a high-concept idea that’s perfectly executed as an action/horror set piece. (Garland even refined the scene from script to screen to maximize its tension, a great example of how scripts always, umm, evolve throughout the writing and filming processes.) Scenes like this are how you get the most out of a premise, and it fully exploits the rules of its sci-fi world. That could be said about all of Annihilation’s set pieces—the plot mechanics are unpredictable for the most part, but every moment feels inevitable. It’s good writing, but more importantly, it’s strong world building that’s consistent with its internal logic. And unlike lesser entries in the sci-fi/horror sub-genre, the audience learns more with each set piece, and each has a specific narrative function beyond “let’s try to scare the audience.”

A few scenes may operate like a B-level creature feature, but what differentiates and elevates Annihilation is that it carries actual depth beneath the characters and plot. At its core, Annihilation is about self-destruction and mutation. Most of the characters have self-destructive tendencies in some way (why else go on a suicide mission?), and one of them even has cancer, a direct parallel to the weird biological cancer affecting life inside The Shimmer.

Annihilation effectively combines the body horror of The Fly, the tension of The Thing, and the smarts of Ex Machina. You may have missed this in theaters, but you should read the script and check out the movie. It’s destined to become a cult hit.